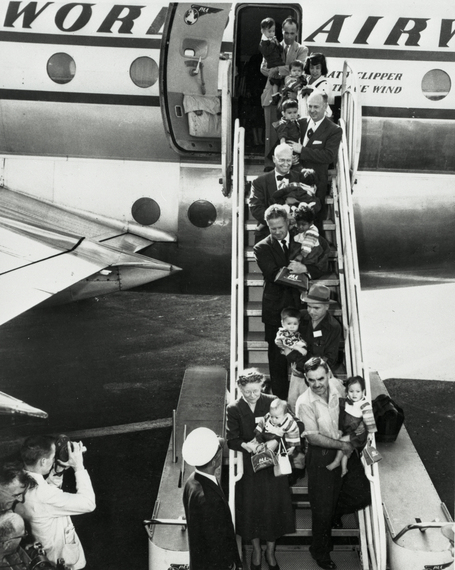 [Image description: Holt International workers, led by Bertha and Harry Holt, are seen walking down the airstair, each holding a baby]

Next week, I’ll be spending a full week in Amsterdam interpreting the meeting between a South Korean adoptee and her family.

Interpreting can and often does involve emotions, since interpreters work with two or more individuals or parties, and does not simply relay words, but may also have to clarify cultural differences of norms which may seem natural to one party, but not to the other.

In the case of interpreting a meeting between an adoptee and their family, it becomes important for the interpreter to manage their own emotions, as the stories and feelings they relay are often heavy, containing stories of personal hardships and emotional distress from both sides.

I’ve met several adoptees during my years working as an interpreter. There seem to be a few obstacles many commonly face when trying to reconnect with their biological family.

First, many have difficulties when trying to reconnect with their biological family should they wish to, as not all adoption agencies were created and maintained according to high standards when mass international adoptions began. A Swedish adoptee I met did not know her birth name, because the adoption agency had misspelled her name several times, with her birth name now unrecognizable to the point of sounding like an odd collection of “Asian syllables”. She and her family (who had flown in for the occasion) went to her birth city in the South, but found out the agency had closed several decades ago, and did not know how to go on, since they also cast doubt on the rest of the adoption documents.

Second, because of the law protecting mothers from being contacted by their children unless they wish to, it is impossible for adoptees to connect to their birth mother if the mother says no to the agency. If you have seen Twinsters, you know what I’m talking about. Since many mothers who had to give up their children were in difficult personal circumstances (being a teenage mother, a single mother, financial hardships, and so on) at the time, many choose to hide their past by never disclosing this information to her future husband and family. The amount of social stigma a single, unwed, teenage mother faces in Korea is, sadly, unbelievably persistent and high, and little concrete government aid is being made to help them balance personal development and raising a child in difficult personal and/or financial circumstances.

Third, even if the adoptee comes into contact with their biological family, a high language barrier remains. Not all Koreans speak English fluently, although many can hold conversations on easy topics. Additionally, because adoption mostly comes from socially marginalized women and families, there many be an additional language barrier. I’ve assisted a friend at a meeting with her family, and although they had been meeting each other for a few years, they expressed how comforting it was to have an interpreter, so they could discuss things “in-depth”. Stories about her sister had wanted to see her for so long, but didn’t know how. Sometimes, well-meaning Koreans may volunteer to help interpret the meetings, but there’s only so much a third party can do for free.

Fourth, behind the language barrier stands the cultural barrier and a physical distance. Although adoptees and their family may be overjoyed to meet in person, the fact remains that the cultural difference between North America & Western Europe and South Korea are immense, and a language barrier may cause additional stress on both parts. These cultural differences can easily lead to misunderstandings, notably since they often communicate in written forms (e-mails, messaging, texting) due to their geographical limitations.

Fifth, many adoptees have faced discrimination in their adoptive environment, and as a result, may have an additional emotional burden. When international adoptions first began, many well-meaning parents adopted Korean and other Asian children without giving too much thought about the implications of bringing them into a dominantly white society. I’ve met black adoptees whose parents did not know what to do when she asked about her physical differences. I’ve met a Vietnamese adoptee who, despite having loving French adoptive parents, felt “out of place” in the mostly white town he grew up and lived in. I’ve heard too many stories of adoptees being called “foreigners” or “Chinese immigrant” due to the ignorance pervasive in their surroundings. Ignorance is also a problem that adoptive parents used to be much less aware of than today (there’s a movement in telling potential adoptive parents not to unless they intend to keep the child in touch with their cultural heritage): the “Let’s adopt this poor child” mentality preceded ramifications of what their child might experience as the only non-white kid in town.

Sixth, not all adoptive parents were good parent material, period. Because orphaned children would be something many Asian countries considered as a “burden” and a “problem”, many adoption agencies were less than charitable and more of a business. The Korean government, for one, had many adoption centres and brokers which gave zero thought to the state of the children, but on how they could “get rid of them, as soon as possible”. Some adoptive parents may have chosen to adopt because they were ineligible to do so in their own country (disclaimer: I am not denouncing all adoptive parents – I am well aware that many if not most adoptive parents are good people and caring parents – I am simply stating that I have met adoptees who have faced less than optimal treatment from their parents, possibly due to lax regulations).

Because of the challenges involved in an adoptee meeting their biological family, I have great respect for them. Going through all the paperwork, often slow communication from adoption agencies, and emotional distress requires a strong sense of dedication and perseverance. It’s even more difficult when the adoptee knows no other Koreans at all, and the biological family cannot speak English at all.

In the United States, AdopteeBridge offers mentoring, translation, and consultation services for Korean adoptees at reasonable rates. Holt International has a blog with specific tags for Korean adoptees. There’s also a podcast, which was once funded by the US government. Currently, only Belgium, Denmark, France, Italy, The Netherlands, and Sweden have Korean adoptee organizations.